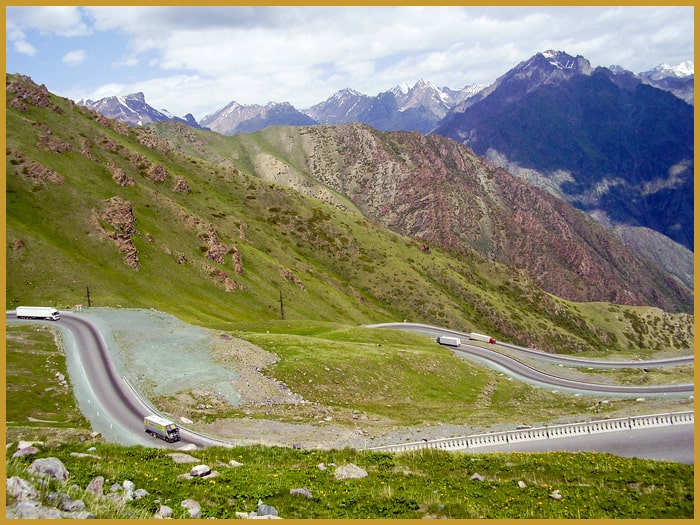 Day 1: Bishkek – Toktogul
After your arrival, the driver will transfer you from Manas International Airport to the capital of Kyrgyzstan, Bishkek city. It will take about 30 minutes. Whole day we will visit important sightseeings of Bishkek as Pobeda Square (Victory Square), Duboviy Park (Oak Park), Central Ala-Too Square, the National Arts Museum, National Philharmonic and other places on the way. In the second half of the day we will keep travelling to Toktogul. The road dedicates to southern side of Kyrgyzstan. On the road you will see the all beauty of gorges and surrounding mountains. In addition, there will be opportunity to see panoramic view of Tue Ashuu which is more than 3000 meters pass. During our way you are free to make photos, because you will have several stops. Overnight is in a home stay.

Day 2: Toktogul – Osh
In the morning we will continue our tour to Osh city. It is considered to be southern capital of Kyrgyzstan. The road will take about six hours through mountain road. We will visit Uzgen Tower in Djalal Abad region that was built in 11th century by Karakhanids. You will also see mausoleums dedicated to leaders. After you are in Osh city, we will have a walk till Suleiman Too (Solomon’s Mountain). Sulеiman Too mountain is the first UNESCO world heritage site in Kyrgyzstan. It is located in the center of Osh and rises 175 m above it. Since ancient times, Sulеiman Too has been a sacred place for Muslims, and many pilgrims come here. Currently, the mountain itself and the structures located on it, many of which were built several centuries ago, are part of the historical and architectural complex.

Day 3: Osh – Abshir Ata – Osh
Today’s destination is Abshir Ata waterfall. Abshir Ata Waterfall is a geological reserve at Abshir Say River in Nookat District of Osh Province of Kyrgyzstan. It was established in 1975. The waterfall is the mouth of an underground river. The water cascades down in two steps (15 m and 12 m) through 1.5 m cave in a sheer cliff. You will have a picnic on the shore. Evening dinner will be in the city and night is in a hotel.

Day 4: Osh – Kazarman
Today we will keep travelling to Kazarman village. Kazarman has a population of roughly 15,000.  It’s extremely isolated and mostly known for its proximity to certain popular sites. Not far from the village is the Makmal Gold Mine, although it’s no longer in use.  However, the village’s real claim to fame is the nearby petroglyph museum called Saimaluu Tash that’s extremely popular with travelers in Kyrgyzstan. Saimaluu Tash (3,200 m) is a petroglyph site that contains over 10,000 carved drawings.  The petroglyphs are estimated to date as far back as 2,000BC up through the Middle Ages. Night will be in a guest home.

Day 5: Kazarman – Tash Rabat
After breakfast we will travel to Tash Rabat Caravanserai which played very important role during Great Silk Road time. Tash-Rabat is a unique architectural monument located in the rather picturesque Kara-Koyun gorge of the Naryn region, 110 km South of the city of Naryn, at an altitude of 3200 m above sea level. Tash-Rabat is one of the main architectural attractions of Kyrgyzstan, which dates back to the 15th century. In the middle ages, on the great Silk road, the fortress of Tash-Rabat served as a caravanserai, that is, it was an Inn for merchants and travelers. Tash-Rabat was located on the trade route that in those days connected the Chui and Ferghana valleys with Kashgar. For hunters and pastoralists, this stone building was an unusual structure, and it was associated with ancient legends. The night is in yurts near the place.

Day 6: Tash Rabat – Kochkor – Bishkek
Today we will drive back to Bishkek city. On the way you will see amazing gorges and mountains. Moreover, we will visit Kochkor village where you will spend time with local family. They will show you carpet creating process. After that we will visit Burana Tower. In the past it was minaret. Tower was also used in Silk Road time. You will see open air museum and balbals around. On request you can climb to the top of the tower. The night is in a hotel.

Day 7: Bishkek – Airport
In the morning is transfer to airport.