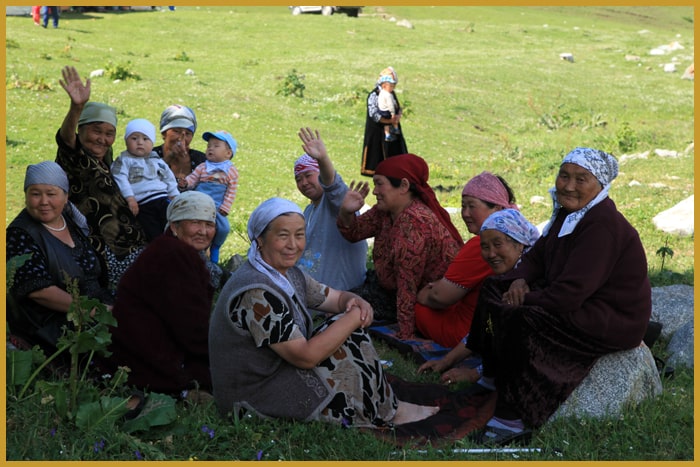 Day 1: Bishkek – Burana – Kochkor – Son Kul
Your driver will wait you at Manas International Airport and accompany you to Bishkek city, capital of Kyrgyzstan. Then we will begin our way to Son Kul Lake. Son-Kul is a mountain lake in the central Tian Shan, virtually in the center of Kyrgyzstan. The name translates from Kyrgyz as “the last lake”. Son-Kul lies at an altitude of 3016 m (9895 feet) above sea level. At 29 km (18 miles) long and 18 km (11 miles) wide, and maximum depth of 13.2 m (43 feet), Son-Kul is Kyrgyzstan’s second largest lake. Surrounded by high mountain plateau, Son-Kul has no trees. The meadows are rich, and therefore are used by shepherds from Kochkor, Naryn and At-Bashi as summer pastures for their flocks. During the summer, visitors can find plenty of people and animals, plus several yurt camps. In fact, there is evidence that shepherds have been coming here since ancient times. There are small arrangements of standing stones and stone circles - nothing as big as Stonehenge, but it is interesting to speculate how they got here and what their purpose was. On the way we will stop to see Burana Tower with open air museum and visit local family in Kochkor village to see carpet making presentation. The night is in yurts.

Day 2: Son Kul – Kazarman
Today we will drive to Kazarman village. Kazarman has a population of roughly 15,000.  It’s extremely isolated and mostly known for its proximity to certain popular sites. Not far from the village is the Makmal Gold Mine, although it’s no longer in use.  However, the village’s real claim to fame is the nearby petroglyph museum called Saimaluu Tash that’s extremely popular with travelers in Kyrgyzstan. Saimaluu Tash (3,200 m) is a petroglyph site that contains over 10,000 carved drawings.  The petroglyphs are estimated to date as far back as 2,000BC up through the Middle Ages. The village of Kazarman is best visited from mid-July to mid-August due to heavy snowfalls that can start as early as September. The night is in a guest home.

Day 3: Kazarman – Osh
In the morning our route begins with Osh city. Our trip will take six hours. We will visit Uzgen Tower. Once, in the II century BC, the ancient travelers, with caravans of camels and horses chose a place to rest on the way from the Fergana Valley to the legendary Kashgar. It was the town of Uzgen - a village between the Kara-Darya and Yassi. Today Uzgen is the administrative center of the Uzgen district of the Osh region of Kyrgyzstan, located between the major cities - Osh and Jalal-Abad. For a whole millennium, Uzgen was an important transit point for various travelers and adventurers, hunters for oriental spices, and in the middle of the 11th century the Karakhanids (a Turkic dynasty that reigned in 840-1212) founded one of their capitals here. The Karakhanid state was one of the most powerful in the medieval East, and Uzgen was the center of commerce, construction and crafts. New cities appeared near Uzgen.

Day 4: Osh – Arslanbob
In the morning firstly you will visit Suleiman Too “Solomon’s Mountain” which is located in the center. It is very important place for muslims. Arslanbob is a unique creation of nature, a blooming oasis 1600 m above sea level and one of the most beautiful resorts in the south of Kyrgyzstan. Arslanbob district is located in the boundary of the Babash-Ata ridge on Fergana and Chatkal ranges’ western and southern slopes and is famous, above all, for its stunning relict walnut-fruit forests occupying a total of 608.5 thousand hectares. These are the largest planet’s walnut forests. Up to 130 species of trees and shrubs grow here, including walnut, pistachio, almond, pear, apple, cherry plum, currant and others. The forests are multi-tiered with diverse shrub undergrowth. Overnight is in a home stay.

Day 5: Arslanbob
In the morning you will have a walking tour to walnut forest. Arslanbob is often used by travelers as a home base for venturing out into the surrounding area to go trekking or horseback riding.   Popular destinations are the walnuts forests as well as 2 stunning waterfalls and a cave known as the “cave of 40 angels.” In the winter, people often go to Arslanbob to go backcountry and cross-country skiing. You will able The night is in a home stay.

Day 6: Arslanbob – Bishkek
After morning meeting with locals we will return to Bishkek. The route will go via southern part of Kyrgyzstan. In addition you will see panoramic view of Tue Ashuu. The road is supposed to be one of the most stunning in Kyrgyzstan. The night is in hotel.

Day 7: Bishkek
Today you spend whole day in guided tour. It includes Pobeda Square (Victory Square), Duboviy Park (Oak Park), Central Ala-Too Square, the National Arts Museum, National Philharmonic and many other places. Moreover we will visit Asian bazar where you can find everything what you want. Overnight is in a hotel.

Day 8: Bishkek – Airport
In the morning is transfer to airport.