The land of steppe nomads 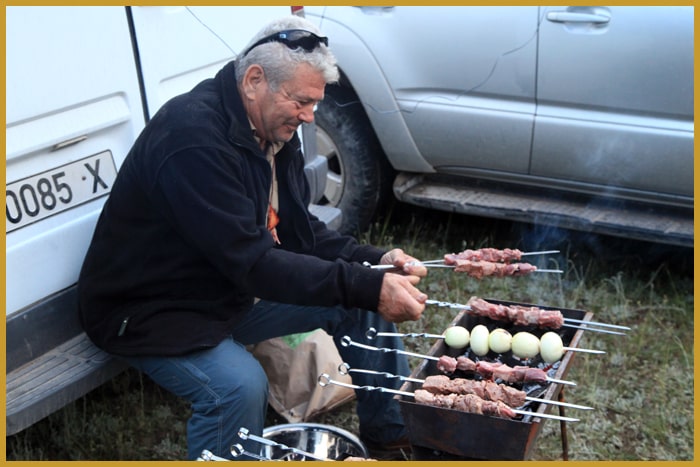 Name of tour: The land of steppe nomads

Day 1: Almaty
On the first day of your tour you will explore the southern capital of Kazakhstan – Almaty city. The first attraction will be Almaty Museum, where you will learn about the history of the city. Then you will see the Aai Opera and Ballet Theatre. It has very interesting history and amazing architecture. After that, you will walk around the oldest park in Almaty - Park of 28 Panfilov Guardsmen, or Panfilov Park. You will be impressed by the beauty of wooden Zenkov Cathedral. The famous Memorial of Glory and Eternal Flame and the Museum of Musical Instruments are also located there. After that, you will visit the Green Bazaar. It is a poplar place for shopping. Here it is possible to bargain to lower the price. After lunch the tour, will countinue to the Medeo Gorge. It is famous for the world’s highest mountain skating rink (1690 meters above sea level) and the dam that protects the city from colossal mudflow.  You will reach the Shymbulak ski resort area by the cable car. The way will take about 20-25 minutes. You will rise at an altitude of 2260 meters above sea level. Different restaurants, ski & snowboarding school and mountain hotel are located on the first level of ski resort. Then next destination will be the Kok-Tobe hill. Its highlight is the highest (above sea level) TV tower in the world. The way goes along the winding mountain road on the park eco-cars. After the walk, we will return to the city center by Almaty cableway. Unfortunately, it is closed on Tuesdays, but we can use park eco-cars instead. The overnight stay will be organized in the hotel.

Day 2: Almaty – Shymkent
After breakfast, we will leave the hotel. You will be transferred to the Almaty International airport for a flight to Shymkent city. The flight lasts about 1 hour 40 minutes. After arrival you will have a guided tour in Shymkent. It includes visiting Walk of fame (park named after Sh.Kaldayakov), “Zher Ana” monument, Ordabasy squar, Park “20 years of Independence of the Republic of Kazakhstan”, Museum of Victims of Political Repression, Obelisk of Glory, Eternal Flame that was built in memory of heroes of The great Patriotic War, Walk of Fame, Arboretum and Regional Museum. After an interesting excursion, you will be taken to the hotel.

Day 3: Shymkent – Turkestan – Shymkent
Today you will discover the main sites of Otrar region, Shaulder Settlement. You will visit the Local History Museum "Otyrar", Arystan-Bab Mausoleum, archaeological site of the ancient settlement of Otrar. The city of Otrar appeared in 4th century BC. Here the medieval philosopher and scientist Al-Farabi lived. During the sightseeing tour, you will see the remains of citadel, main gate and rabad. The total preserved area is about 10 square kilometers. The next important point of the excursion will be the city of Turkestan. It was founded around 500 AD on the Great Silk Road, where the caravans from Samarkand, Bukhara and Khiva passed. Upon arrival you will see "Azret-Sultan" historical and architectural complex, Mausoleum of Khoja Ahmed Yasawi, Turkestan ancient settlement, Necropolis, a remains of the fortress wall, Citadel with gates, Hammam and Hilvet underground mosque. At the end of the day you will return to the hotel in Shymkent.

Day 4: Shymkent – Sairam – Kazygurt – Shymkent
After breakfast, we will leave the hotel and head to Sairam Settlement. Here you will visit the Local History Museum "Sairam", Mar-Tobe, Ibrahim-Ata Mausoleum, Karashash-Ana Mausoleum, medieval minaret. Sairam Settlement is located just 20 km from the Shymkent city, at the place of Ispidzhab. In middle ages, it was one of the major centers of the Silk Road. Nowadays there are remains of buildings of 13-19th centuries. After that, the tour will continue to Kamekalgan natural sacred stones in Kazygurt Mountains. That place is located at an altitude of 1776 meters above sea level in the northern spurs of Talas Alatau. Upon arrival you will see rocks "Adam and Eve", stone drawings of animals, "Noah's Ark" and the magic stone "Dastarkhan".

Day 5: Shymkent – Aksu Jabagly – Shymkent – Almaty
In the morning we will head Aksu-Jabagly natural reserve. It is the oldest natural reserve in Kazakhstan, situated at the spurs of the Western Tien-Shan Mountains at an altitude from 1000 to 4280 meters above sea level. Due to the big territory, it includes different landscapes: semi-deserts, steppes, green meadows, mountains, creeping juniper. On the way, you will admire the picturesque views of the alpine meadows and the peaks of the mountains covered with dazzling snow. The reserve is a home for many rare, endangered species of animals. Here it is possible to see argali, ibex, deer and roe deer, lynx and snow leopards, wolves, foxes, bears, porcupines and ermines. In addition, some rare birds live here: bearded vultures, griffons and golden eagles. In the evening, you will return to Almaty by train.

Day 6: Almaty– Issyk – Almaty
After arrival, you will meet the group at the railway station. Today you will travel to the wonderful lake Issyk. We will drive along Issyk Gorge - one of the most amazing gorges of Trans-Ili Alatau. It lies along the Kuldja tract where a long time ago caravans of the Silk Road passed. In order to learn more about the history of that region, you will visit the State Historical and Cultural Museum-Reserve “ISSYK”. The most famous and valuable its exhibits belong to history and culture of the Saka Period. There are ancient ceramics, weapon, elements of horse equipment, a copy of Golden Man, golden items and the model of Saka burial mound. After arrival at Issyk Lake you will be free to relax and enjoy the amazing nature. The lake is situated at an altitude of 1756 meters above sea level. The guide will tell you everything about the lake and the natural disaster of 1963. After some rest you will be taken to the hotel in Almaty.

Day 7: Flight
After breakfast you will check out of the hotel. Then the transfer will take you to the airport.

Flight Almaty – Shymkent – from 85 $ per person